People involved in the founding of the British Crystallographic Association

Founder members each paid at least £100 (nominally as a ten year membership fee) to the BCA to set up starting funds to enable the association to function until it could collect futher membership fees. 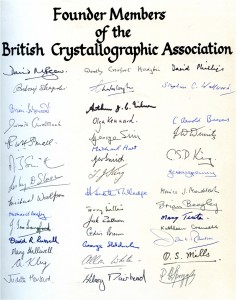 Later 43 of the Founder members signed their names in the beginning of the BCA AGM Minutes book, but not all of them are legible. The March 1983 issue 4 of ‘Crystallography news’ page 3 states that ‘The total number of Founder members is 51.’

We are trying to collect their names together here, please let us know of mistakes in the list below, particularly if you are aware of Founder members who names are not in the list. So far we have (in alphabetical order of surname) :

Thanks to Jeremy Cockcroft for assistance in interpreting some of the signatures (2019).