It is with sadness that we learned the news that Professor Jack Dunitz died on 12 September aged 98, following a short illness. Jack was a giant of modern crystallography and many of us keep his textbooks close at hand at all times. Much of his career was based at ETH-Zurich, but he had roots in the UK and a close association with the BCA, being both an Honorary Member and one of the Founder Members of the Association. An announcement can be accessed from ETH Chemistry and Applied Biosciences news page

It was with deep sadness and a huge feeling of loss that we learned of the passing of Jack Dunitz at the age of 98. Jack was Emeritus Professor at ETH, Zurich, where he worked from 1957 until he retired formally in 1990, although for years he continued to travel, give talks and to meet fellow scientists.

Jack was always an inspiration to many of us reading this newsletter today, and we grew up with his papers and incredible insight into our subject and the clarity of his talks, where we were lucky enough to have enjoyed those wonderful times. I can recommend a very recent interview with Jack and the ACS Editor in Chief, Erik Carreira which is in the link below. Despite his age, Jack demonstrates so well his sense of humour and intellect, which shine through in this interview.

I met Jack first in Oxford in Dorothy Hodgkin’s lab in the mid/late 1960s and it was wonderful as a young DPhil student to have had that opportunity, as Jack was already such a well-known name in our field. Subsequently I got to know Jack well and we met at many conferences, at the Erice Crystallography Schools, the regular CCDC student days and a memorable visit to my lab in Durham. It was always a bonus to sit and listen to him talking, explaining things to the students, asking just the right questions and always enjoying the interaction with other chemists and crystallographers. Jack was without doubt wonderfully inspiring and such a human and knowledgeable face of crystallography.

His legacy to us all is enormous and Jack will be remembered for the way he taught and inspired others, in particular the young, the kindness he showed to nervous students and the patience he demonstrated to new comers to our field who were keen to learn the basics and more, from Jack himself. 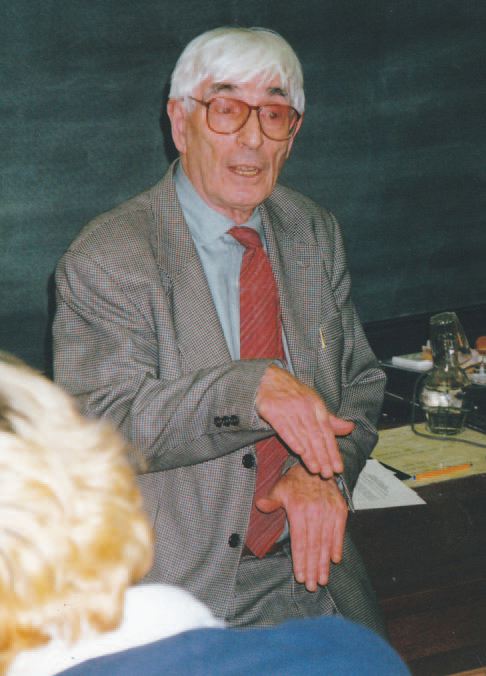 Jack was born in Glasgow, went through school there and entered Glasgow University in 1940 to read chemistry, encouraged by his school chemistry teacher who had ‘made the subject interesting ‘. For his graduate studies, Jack was assigned to the lab of J Monteath Robinson, who had demonstrated the power of isomorphous replacement, but Jack did not use that in his doctoral studies, nor the ‘heavy atom’ methods, but they had explored the ‘new’ Patterson function. After his PhD he travelled south to Oxford to join Dorothy Hodgkin’s lab, to learn about structure solution from 3 dimensional diffraction data and here he spent two years [1946-48] before taking up a post doc in Caltech with Linus Pauling [1948-1951]. There followed another period at Oxford [1951-1953] and a further 2 years at Caltech and NIH [1954-1955] where he worked with the biophysicist Alex Rich to establish a lab of structural research at Bethesda. Jack was recruited in 1956 by Sir Lawrence Bragg to join him at the Royal Institution, London and it was from there that he was appointed to the position at ETH, Zurich as Professor of Organic Chemistry (1957), where he established X-ray crystallography as the essential tool for chemical structure analysis.

Jack received many honours and awards in his life, including a number of Honorary degrees, the Paracelus Prize 1986 (Swiss Chemical Society), the Aminoff Prize 1990 (the Royal Swedish Academy of Sciences), the membership of several National Academies and he was elected FRS in 1974.

Jack’s research took him into many ‘new’ areas and upon each he made a significant impact, changing the way we see and understand chemistry today. He studied the structure and reactivity of medium ring compounds, ion specificity of biologically important ionophores and demonstrated the importance of structure-energy relationships. He derived the Burgi-Dunitz Angle with his colleague Hans-Beat Burgi, which changed our understanding of chiral reactions and helped direct syntheses of enantiomerically pure compounds. He pioneered use of the very early Cambridge database (CSD) to gain new insights into families of structural data and showed how to use these results in a predictive manner. He became involved with the CCDC as a Governor and Trustee of the Board and continued to attend their student days into his 90’s. The students loved to see him and, nervously, try to answer Jack’s penetrating questions. Jack was deeply interested in the expanding and now commercially important study of polymorphs; in experimental charge density; all forms of hydrogen bonding – which had started in his doctoral thesis; phase transformations in the solid state and crystal structure prediction.

In the late 1940s he had worked with Verner Schomaker at Caltech to determine the structure of cyclobutene by gas-phase electron diffraction, another pioneering breakthrough. His work in Oxford, with Leslie Orgel, in determining the structure of ferrocene was a true landmark in organometallic chemistry (1953) and in that famous year, together with Dorothy Hodgkin on a visit to Cambridge, they witnessed the exciting new structure of DNA built by Watson and Crick. It was also the year he married Barbara Steuer, with whom he had recently celebrated their 68th wedding anniversary.

Jack was a deeply committed scientist and chemist, someone who loved his research work and his teaching and this he never stopped doing. His love of chemistry and science was paramount, but his interest in the arts and in music was also for him a very positive part of his life. Jack and his wife Barbara had been keen hikers into the local mountains of Switzerland and he was known to be doing serious exercise and swimming into very recent old age. I met Jack twice when he was over 90, once in Paris for the International Year of Crystallography (2014) and again in Cambridge to celebrate with Olga Kennard, 50 years of the CSD (2015). It was great to see that he hadn’t lost his love of science and sharp, enquiring mind at all.

We shall miss Jack’s regular presence at so many of our crystallography meetings, but we can enjoy his legacy and whatever each of us recall about meeting him and sharing his time to discuss our subject, to which he was so passionately and so deeply connected for his entire lifetime.

In his autobiography La Primavera Jack wrote ‘If I had another life, I would be happy to live it along much the same lines as I have lived this one’ . How wonderful an epitaph?

You May Also Enjoy

The BCA Council issued the following statement on behalf of the British Crystallographic Association.

The short video below is available from the BBC and made in partnership with the Royal Society. Featuring Judith Howard and Georgina Ferry, it is part of the...

The planning meeting for the next BCA Spring Meeting (11-14 April 2022) is being held on Thursday 17 June 2021. The programme committee is listed below. Memb...